We can sell Houses, can we sell Magazines?

This was the question 5 Ray White QLD auctioneers found asking themselves last Friday as they stood on the street selling the 400th edition of the Big Issue Magazine. ‘Spruiking, yelling and engaging the passers by as best they could. The auctioneers certainly found themselves in unfamiliar territory on the streets of the Brisbane CBD.  In an amazing effort, the 5 Ray White Queensland auctioneers sold a total 186 magazines in just 40mins!

To further mark the Big occasion, 30 Ray White Auctioneers from around the country teamed up with the Big Issue vendors to  see how many magazines they could sell. Although an original target of 400 was set, the auctioneers but their gavels to one side and sold an amazing 816 magazines in the set period.

Ray White Maroochydore Principal and Auctioneer Dan Sowden was part of the QLD team. “It was amazing to see the comraderey that formed with our vendors on the street and amongst the auctioneers, all we wanted to do was beat the other states, sell the most magazines and help raise some funds for a brilliant cause”

Vendors buy copies of The Big Issue magazine for $2.50 and sell them on the streets for $5, keeping the difference. Since the magazine’s launch in 1996, more than six million magazines have been sold, generating more than $13 million in income for vendors. 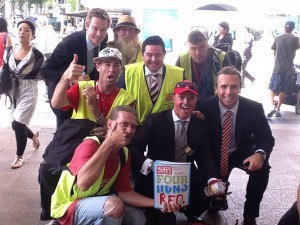