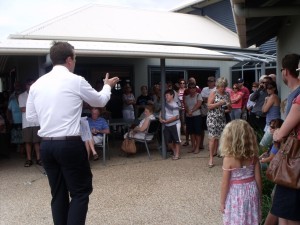 A crowd of over 120 witnessed 6 bidders fight it out at the Auction of 13 Plymouth Quay, Maroochy Waters on Saturday morning, with the property selling well over reserve price for $850,000.

Marketing Agent and Maroochy Waters specialist Delwyn Goonan from Ray White Maroochydore reported. “We had over 110 group inspections throughout the 5 week campaign, the result on the day was a true testament to the property and the waterfront location”

Located in one of the most prestigious streets in Maroochy Waters, the large 4 bedroom family home featured a prominent north facing waterfront aspect, in ground salt water pool, pontoon as well as ample car accommodation and room for a boat.

Ray White Auctioneer Dan Sowden opened the auction proceedings. “It has been sometime since we have called an auction where you can not get a park in the street!, Apologies if you have had to walk some distance today”

“Unfortunately their will be some buyers today that will miss out, with 11 bidding registrations, their can only be one winner when the hammer falls, good luck to you all”

The bidding then started at $680,000 and quickly worked up to $770,000 where the property was placed on the market. As the buyers knew they were now “playing for keeps”, 4 bidders continued to fight it out. Surprisingly the highest bidder and now the new owner only made his first bid at $850,000 where there were no further bids and the property was sold under the hammer

The local buyers had been shopping in Maroochy Waters for sometime.

Ray White Maroochydore was appointed by the Mortgagee to effect the sale.