One of the last beachside blocks of land sold.

As one of the last remaining beachside blocks available at Buddina, it’s no wonder competition was fierce to secure this coveted parcel of land at 22 Lalwinya St, Buddina.

Reaching more than $65,000 above pre auction offers, agent John Bartsch said taking the property to auction was the best way to really test what it was worth.

“It meant we were not putting a cap on the final price, which may have been too low,” says John. “By taking it to auction, with an intense four-week campaign, we could really determine what the market was prepared to pay.”

Tightly held since 1973, the previous owners originally bought the land with the intention of building on it for their retirement years. However, after a change of plans, they decided it was finally time to sell.

“One of the unique things about this area is that there are a lot of original three bed, one bathroom, one car homes, so people actually buy the original properties with a view to either renovating or knocking down the house and building a new home, but they didn’t need to do that with this one,” says John.

As expected, the level of interest was high for the vacant beachside block, with more than 60 general enquiries throughout the campaign and 25 parties through the open home resulting in several pre auction offers.

“We had four offers during the campaign, however, the owners wanted to continue to auction as they knew their property was worth more,” says John.

And they were right, with the property selling under the hammer for $770,000, $65,000 above the highest offer prior to auction.

There was a buzz of excitement in the air on the day of auction. With Ray White Maroochydore Director Dan Sowden expertly calling the bidding, assisted by John and two other agents, it was a nail-biting event right up until the last minute.

“We had eight registered bidders on auction day,” says John. “We got to $725,000, with one active bidder remaining. We then negotiated with them on the floor, which saw us come back to calling the auction further at $750,000. This saw a second bidder come back in and we ended up pausing the auction and negotiating with the highest bidder once more to $770,000 before the property was sold.”

Watching nervously from Sydney via Facebook live stream, the original owners, were chuffed with the result. In fact, the entire sale process was done remotely, with seamless results from start to finish.

“The sellers were not located here on the Sunshine Coast so they entrusted us with the whole marketing campaign, feedback and advice on auction day,” says John.
“We had telephones hooked up and we were constantly relaying info back to the owners so they could keep up.”

On the other end of the sale, the happy new owners, a young family from Victoria can’t wait to start their new life on the Sunshine Coast. 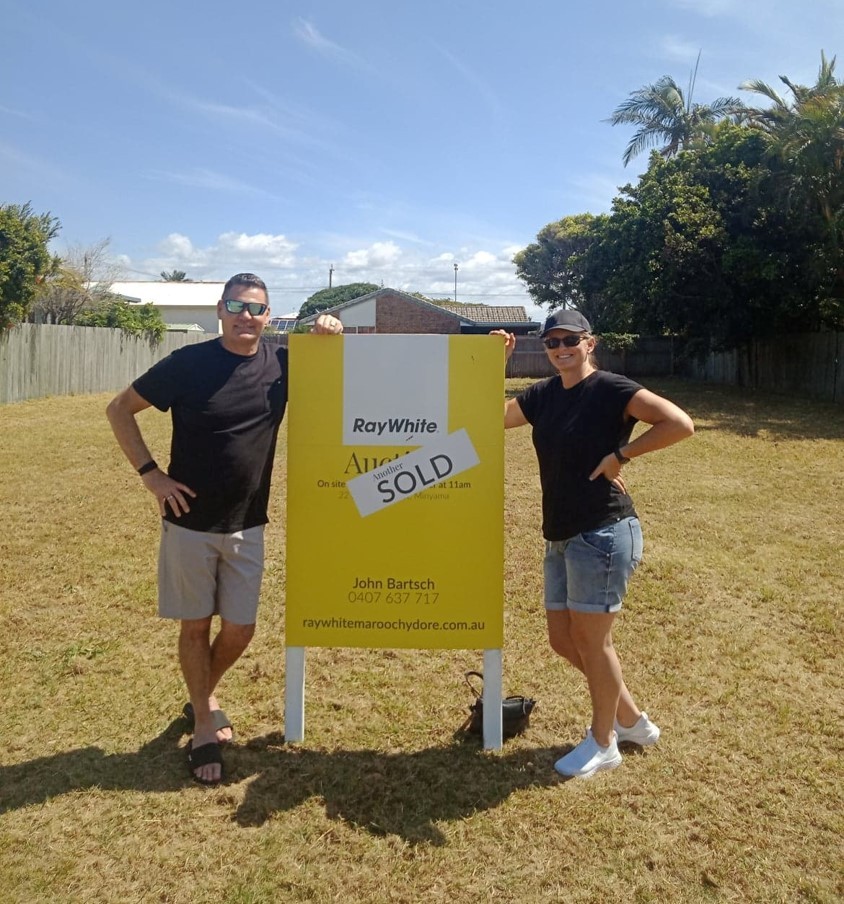 “Just a couple of days before the auction, they were having dinner at Mooloolaba and just envisaging their lifestyle here on the Sunshine Coast and securing this prime piece of land to build their dream home,” says John.

“They were so delighted to be the highest bidders and can now realise that dream. They just can’t believe how close everything is and are now in the process of engaging a designer and builder to create their dream family home.”