A new report on the future economy of the Sunshine Coast points to signs of boom days ahead, with emerging ‘Capital City’ Maroochydore figuring prominently as the hub of growth.

Independent research firm Resolution Research Strategies found the Coast’s economy has doubled in size over the past decade, with continued growth expected, providing opportunities for investors and residents alike. 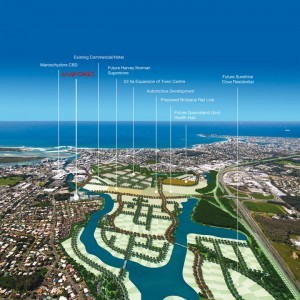 Already new public and private infrastructure investment on the Coast is estimated to be in excess of $4.35 billion, fuelling an estimated 30,000 new jobs. This contrasts reports of a sluggish to stalled economy in this sun-drenched coastal region just north of Brisbane.

The newly designated epicentre of the Coast, Maroochydore, is in the throes of massive expansion as it morphs into the Sunshine Coast’s ‘Capital City’. The suburb’s growth will continue, by design, over a number of years, driving a concurrent demand for residential accommodation and generating long-term employment opportunities.

The study predicts a increases in the Coast’s population, with an estimated residents population of more than 500,000 residents expected in 20 years’ time, far exceeding the current base of about 320,000 as reflected in the 2011 Census, an increase of 27% from 2006. The census also revealed that the new-resident population of Queensland has increased 11% since 2006 to 4.3 million.

A strong wave of new residents is likely to equate to new job opportunities, according to the managing director of Resolution Research, Diana Howes.

“This study points to a brighter long term outlook for the Sunshine Coast than most pundits have envisaged, with strong potential for growth, and promising economic and infrastructure projects in the pipeline.”

The greater Maroochydore area is the heart of the regional Sunshine Coast commercial centre, and the nucleus of education on the Coast.

“It’s our view that the dynamic growth in the Maroochydore area will fuel increased demand for new dwellings throughout the Sunshine Coast, with the new ‘Capital City’ as the epicentre,” noted Ms Howes.

“Public and private investment in the region will equate to an increased need for convenient accommodation, in key locations.”

Rental Income on the Rise

Landlords will appreciate the projected increase in investment values: the median price for an apartment within the Mooloolah parish grew on average at a rate of 8% per annum over the past ten years. “The growth we saw in the Mooloolah region is one of the strongest rates across the Sunshine Coast, and a trend that’s likely to continue,” opined Ms Howes.

The Sunshine Coast is already recognized as being integral to Queensland’s economy, with significant contributions coming in the sectors of tourism, manufacturing and retail. Yet projected growth on the Coast is not limited to any one sector. From new health facilities to an international transportation hub, the Coast continues to be the beneficiary of a multi-faceted development strategy.

A major economic boost will come in the form of the $2 billion Sunshine Coast University Hospital, slated to open its first phase in 2016. Construction commenced in 2011 on the major project at Kawana, which on completion will be the largest single employer across the Sunshine Coast. The construction phase is forecast to generate over 11,000 jobs alone, with over 4,500 permanent staff once operational.

Next, the Sunshine Coast Airport, long a domestic hub for tourists on getaways to Queensland, will now spread its wings into an international facility, hosting Air New Zealand flights, while also upgrading its terminal. “In our estimation, Air New Zealand’s investment will add some 50,000 new room nights across the Coast,” noted Ms Howes.

Additionally, Silicon Valley has its counterpart in the flourishing Sunshine Coast Innovation Centre, located adjacent to the University.  The Centre currently works for more than 30 private companies and, to date, has supported the start-up growth of over 87 businesses, creating around 350 jobs. The Centre is also at the hub of the Knowledge Precinct taking shape around the University.

“Given that the strategy for growth on the Coast is not reliant on any single sector, but rather benefitting from a strong combination of public and private investment, the economic future is robust and well-balanced,” said Ms Howes. “It’s an exciting time to be on the Coast, with opportunities now emerging to bolster the local economy from its current levels.” 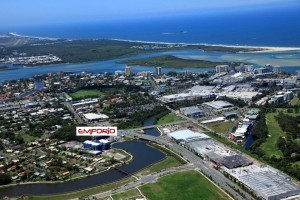 For more information regarding the Emporio development, visit www.emporio.net.au or call the onsite display suite on (07) 5451 8500 to arrange your private viewing.