Mentoring the Next Generation

When Brendan Ford isn’t meeting with clients, answering buyer enquiries or negotiating that next deal, he’s spending time with the next generation in sales. Despite being just twenty six years of age, Brendan who is already an industry veteran, is taking steps towards ensuring the ongoing development of business sales by implementing a mentoring program for new recruits.

Having made a commitment back in 2010 to mentor a new recruit each year as part of his efforts to improve standards in the industry, Mr Ford has since built the career paths of two of the Sunshine Coast’s most promising young agents. Throughout 2011 Brendan coached and mentored Elly Heathcote who has now gone on to become one of Ray White Maroochydore’s rising stars. After twelve months under Brendan’s guidance Ms. Heathcote developed into an extremely motivated and competent agent. Making her first sales in only a few days of starting in residential
real estate, Elly today still holds a 100% success rate at auction. 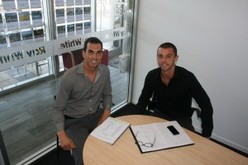 This year Mr Ford has brought in Oliver Wadhams to the Ray White Business Sales team. Having just completed a degree in Business and Property Development at Bond University, Oliver has already excelled under the program generating significant results thus far. Mr Wadhams who specialises in the sale of hospitality based business such as cafes and restaurants has been thriving through the program so far. “Brendan provides such clarity and insight to an industry that is so complex. It’s been amazing being able to learn from one of the industry’s best brokers.” Mr Wadhams explained.

“Business sales has been incredible to me, it’s about time I gave something back. The idea behind starting a mentoring program for younger recruits was about giving someone the opportunity to develop their full potential. When I started I was given the Yellow Pages and told to go out and sell, that was it. The reality is this approach simply doesn’t cut it anymore. By passing on what I know to the next generation ensures business sales will continue to flourish as its own entity.” Mr Ford commented.

Brendan doesn’t plan on stopping there, With whispers that he’ll be engaging with local schools to help students develop their business ambitions. Mr Ford strongly

believes in passing on his experience and knowledge so that others can learn from it. “We learn from our mistakes not our successes however if we can share those mistakes with other people before they make them, particularly with the younger generations, then we’re sure for a brighter future” Mr Ford explains.