Strategies in the Auction Process 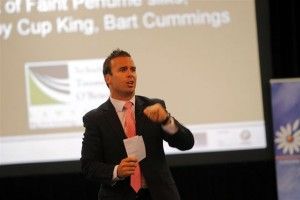 Having auctions in your bag of marketing options is essential …just ask Dan Sowden.
As a director of Ray White Maroochydore and an auctioneer he said it was like the driver was to a golfer.
“The way the market is, agents have to be able to legitimately offer a number of strategies to sellers .. and be proficient in them,’’ Dan said.

“If you put an auction sign up and wait, you will be living in hope.’’
The value of having in-house auctioneers is significant from both the buyer and seller perspective, Dan said.
“That way you can talk to the auctioneer on day 1 or day 31 of the campaign. They will become another advisor to the seller during the campaign.”

“It’s wrong to think that by having an auction the buyers will suddenly appear on the day. A lot of the time buyers will go to an auction but not necessarily to bid. Yet if you have that early contact the auctioneer will also be able to meet with the buyers and advise of what to expect on auction day. They can talk them through the process and increase the probability of them bidding instead of just registering.’’

Dan said there were three key things to remember by having the auctioneer involved in the process:

1. There are benefits to seller from day

2. There are benefits to the buyer throughout the process.

3. There is the benefit of the agent-auctioneer relationship, they can work together to help put agreements together.

Dan started in the real estate industry on January 26, 2004, and has been an auctioneer from 2006. He became a director or Ray White Maroochydore two years ago. He advocates the use of a separate auctioneer and marketing agent as it makes a much more fluid process.    “The buyer can be dealing with the marketing agent throughout the process and this way can stay close to them while the auctioneer is removed from them.”
“They can lose that support if the marketing agent is also the auctioneer.’’
Dan said Ray White encourages all of their agents to get auction experience as they make up about 30% of properties they are actively marketing.   “When agents speak to sellers they expect the auction process to be mentioned, so all the team need to be proficient in them. The sellers now know they have a choice … a choice of agency, a choice of process. We need to offer every option to allow the seller to make their decision.’’
Ray White also encourage agents to get their auctioneer’s licence.
“It’s our business,’’ Dan said. “Auctions play a big part. We grow our auctioneers, that way we can book an auction for any day, any where, any time. We need to be bringing through great auctioneers. It gives them a greater understanding.   “When they try the auctioneer shoes on they find they do a lot better as an agent.’’
Auctions are like in sport, Dan said, and as an auctioneer you are only as good as your last performance.
“We sold one on Saturday at Buderim for $695,000 with Mitch Rowe. It was a great effort on Mitch’s behalf. It always going to be a delicate result to get together.
“It was a great auction as Mitch had done all the right things in the lead-up. The sellers were listening as well, so we got it together.’’   Dan continued to liken auctions to sport by saying it was like game day.
“The people are there, you have the anticipation – it’s the reason why I’m in real estate. Saturday is the exciting end game of real estate. It’s when sellers can move forward with their plans, when buyers can move into new homes.  It helps that Aussies are fanatical about real estate … and sport.’’
Yet charity auctions are among Dan’s favourites. The Health Foundation charity day at Hyatt Coolum probably stands out when three Ray White auctioneers worked as a trio. However, Dan also did the auction at the first Steve Irwin Day in 2008. That was in front of 4000 at the Crocoseum.   “It was unbelievable,’’ he said, “I even had Jimmy Barnes as the lead-in.’’