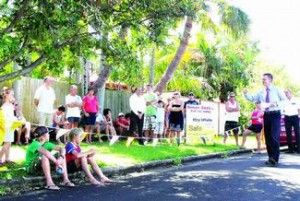 “We are selling,” Simon Birse said in his marketing and the Ray White agent wasn’t exaggerating when it came to auction day on Saturday, February 19.

With cars parked way down the street there was no doubt everyone had come to see Simon and auctioneer Justin Voss put on a show when offering 18 Wandarri Street, Wurtulla, to the market.

Wurtulla is Simon’s area when it comes to property, he knows the market and the market knows him.

The four-bedroom beachside home just two minutes to the beach had drawn good interest throughout the four-week campaign.

By auction time there was a crowd of about 40 which included six registered bidders. The auctioneer decided to hold the event on the street and onlookers lined the footpath, giving Justin a wide stage to entertain them with his usual wit.

The investment property had been to the market previously at a price with no result. The Brisbane sellers have purchased property further up the coast and wanted to cash up.

Simon suggested they take the price out of the equation – auction was the obvious choice.

With two offers throughout the campaign they stuck it out til auction day as many sellers choose to do – it gives them their day, so to speak, with no question of what could have happened.

Justin opened with comment that by securing beachside you could be confident of a good investment. Bidding came quickly from the crowd at $350,000 and rapidly climbed in $10,000 increments to $410,000.

A third bidder soon came into the game and the bidding moved in $5000 increases to $445,000. With no referring to the sellers needed the property was on the market and selling.

With the exchange rate looking so positive, the sellers of 4 Mountain Ridge Close relocated to England to purchase property. Jodi Price of Ray White being local was instructed to sell their Buderim home by auction.

Jodie said the interest had been good with the home interesting a variety of buyers. The large block in a quiet cul de sac street in a good area was very appealing.

Justin Voss called the auction out in the street whilst Jodie phoned the vendors in England to be part of the action.

Justin announced. “It’s been a busy day auction wise with all properties apart from one selling under the hammer so far.”

Not only had it been a big day auction wise for the auctioneer but Justin had begun the day at 4am with a 190km charity cycle finishing at 11am in time to start a string of auctions and was leaving this one at 3.30pm to do a 21km run at Coolum.

With no indication of how the day had begun or was to end he energetically opened with “What a great location situated five minutes to Buderim Village to the west or five minutes east to Mooloolaba Beach. This home ticks all the boxes with style and character on a beautiful parcel of Buderim soil.

“Apart from what’s on offer here today there has also been a change in the seller’s circumstances”.

A few minutes of silence and then an opening bid came from the floor which was increased by $50,000. Following a vendor bid the property was passed in at $450,000 with further negotiations to be carried out by Jodie and interested parties.

The afternoon was another scorcher but it didn’t keep the crowd away from 132 Glenfields Boulevard, Mountain Creek.

Mitch Rowe of Ray White Buderim was taking the five bedroom home to auction on Saturday with Justin Voss as auctioneer.

Mitch reported that “four bidders registered and three active bidders went head to head. Bidding started at $500,000 and went very quickly to $580,000 when it was referred to the seller who wanted a bit more.

“At this stage the highest bidder increased their offer to $590,000 which was in turn relayed to the seller and subsequently Justin announced that the property was on the market and it was sold.

“The buyers are from Brisbane and are relocating to the Sunshine Coast. They have been looking since Christmas and are extremely pleased with their purchase”.